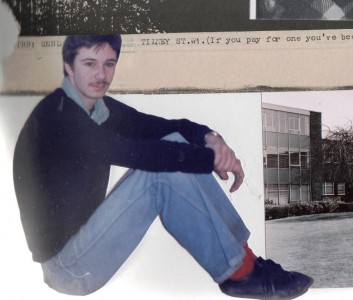 Part of the "New Wave" of Painting culture of the late 1970s, Morley, in the early 1980s, helped establish a new human and narrative content in art. This ground swell of a new creativity and return to painting values, weakened the monopoly of 1960s and '70s concept based art, giving us today a complex, individualistic, visually rich and skill built practice. (Read information on Artworks 5).

Morley exhibits throughout the British Isles.

He is currently represented at the Signature Gallery, Kirkland, Kendal. 01539 730260 (contact gallery for opening times).

CLICK ON ARTWORKS PAGES.  New images and text are being added to this site. Click on images to benifit from enlarged pictures.

THIS ARTIST, coming to the artworld from the dark industrial north, burst into the sunshine of the "Garden of England" in Kent as a raw champion of painting. He almost immediately teamed up with a like minded student at art college called Johnny B, and together they set upon a "painting backlash against the obsequiousness and corruption of Conceptualism".
Alan and his southern rude boy painting buddy became known as the "Figurative Brotherhood"; their quest, no less, was to stab the spleen of a mono-culture which was suffocating art and they vanguard the creation of a broader art enviroment for a fuller and healthier practice to exist. Rejected by London's frightened gallery circle, Johnny, after college, went to work in an Essex health food shop and pumped iron at night in seedy gyms amongst some of the worst Hammers and Millwall criminals. Morley cut a scant living as an artist in a rented garret in the rough end of Paris whilst cohabiting with a doting dark haired French baker girl who worked in a patisserie below. His garret's large oval studio window looked out across the chimneys and rooftop apartments of the city.
With the bells of Notre Dame audible on Sunday mornings, he would often take coffee to the window seat and gaze out into his next imagined painting whilst the baker girl slept. He painted the Parisian ladies of the night - they paid him - and the wino low lifes - he paid them. Fighting with sailors from St.Malo and Marseilles, drinking in the new Folies-Bergere and taking vacations to the clean Mediterranean light of southern France was his life until homesickness at the end of the 1980s pulled him back to the cold gritty grey of England's north. He now chooses to live in blissful isolation surrounded by animal companions on a remote farm on the edge of a Saxon Wood where he wrestles with stags and swims the ice cold rivers each morning.
*
His British landscape paintings are sold through selected loyal country galleries under the term "Rural Romanticism". The only alternative employment he has ever had to painting is the 10 years of filming on beaches in seductive black'n'white with girls he was partnered with for two major aftershave and body fragrance companies... But that's over now.

THIS SITE IS NOW A SHOWCASE FOR THE LONG AWAITED "BIG PAROCHIAL" PAINTINGS. The above artistsandillustrators site displays more general artworks. New works are being added gradually to both sites.