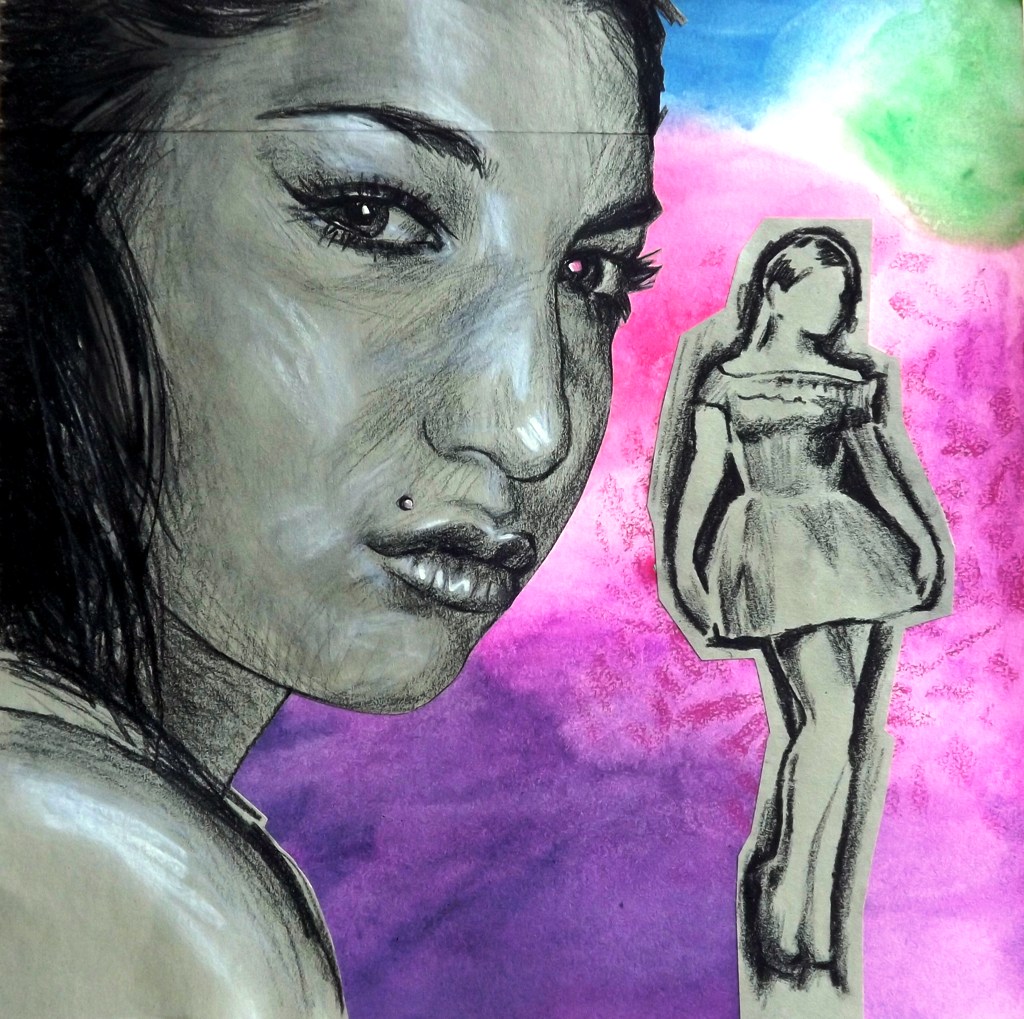 In the early part of my art student period my dad pushed me into getting looking for summer holiday work. He directed me to apply to M'bro council to work in some capacity as a "commercial artist", as he termed it. The council found work for me with their team of graphic designers who operated from a building attached to Dorman Museum. They designed all sorts of posters, pamphlets and adverts for the council and local media. I effectively was an understudy and picked up a wage while learning the trade and was given tasks to do which contributed to some of their published and printed work... Thoroughly enjoyable! The skills I picked up led me years later to become a poster artist for Teesside nightclub promoters and pub managers during my post-grad period when I needed to make a living. The images you see in the above section go some way towards showing you the type of "pre-print" paste-up art I produced in the 1980s. I've utilized some of the original logos and official designs, created by other artists, which were sometimes allowed in the poster creation briefs, and I want to take my hat off to those designers responsible for the original iconic font and graphics which helped the final overall look. WATCH THIS SPACE FOR FURTHER INCLUSIONS!


PAINTINGS TO APPEAR ON THIS PAGE:

24 Hours From Teessville, One Day Away From Your Heart.

Coming Back To Middlesbrough After My Hype.

Return of the Northern Lard Man.

I Lost My Heart on a Wet Wednesday In Pallister Park.

(The last painting in the group of four above) "Lover's Lane" - A lad called Russel and a lass called Tracy. A spring scene on the path to Saltersgill (there's a title there for another painting). I painted this at the height of the Gang days and my getting to grips with the business of cutting it alone as a pro' artist... Pubs, clubs, football - feeling free of the art politics of London - learning to live back home with mam and dad again in their world, group trips to Scarborough, Whitby, Stockton, Darlo', Hartlepuddle, keeping on top of business accounts, learning that the press don't print the words you say in interview, coming home late or even the next day after forgetting to phone home, painting in the shed in the nice weather and in my bedroom in the winter - all before the launch of Fly Me To The Moon and becoming their first illustrator and before I seized on my black'n'white logo (me smoking) and finding an identity as a painter in the provinces. 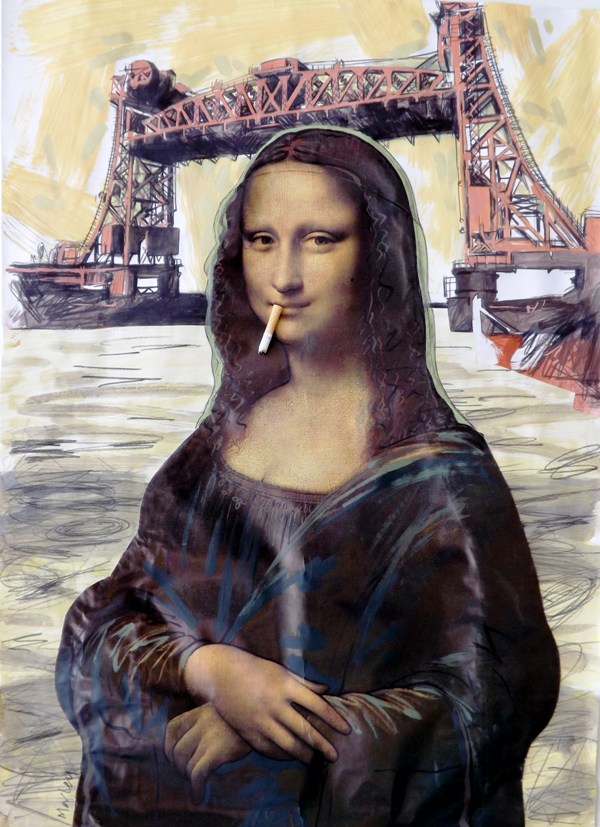 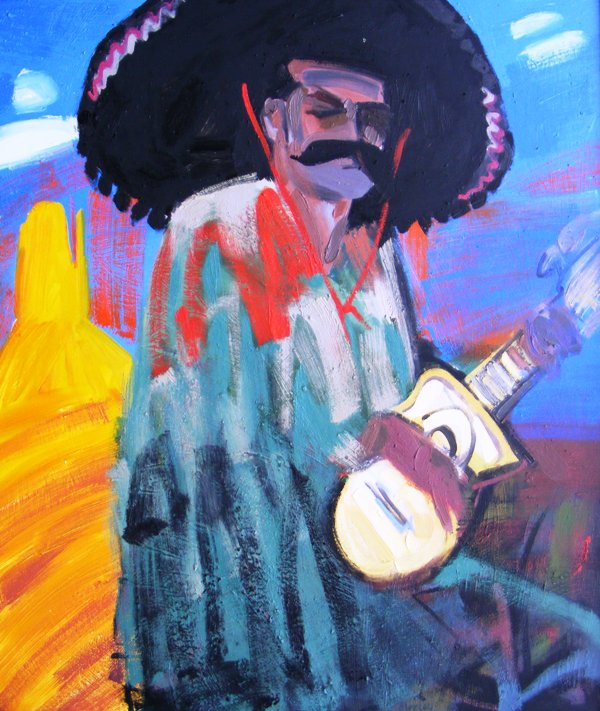 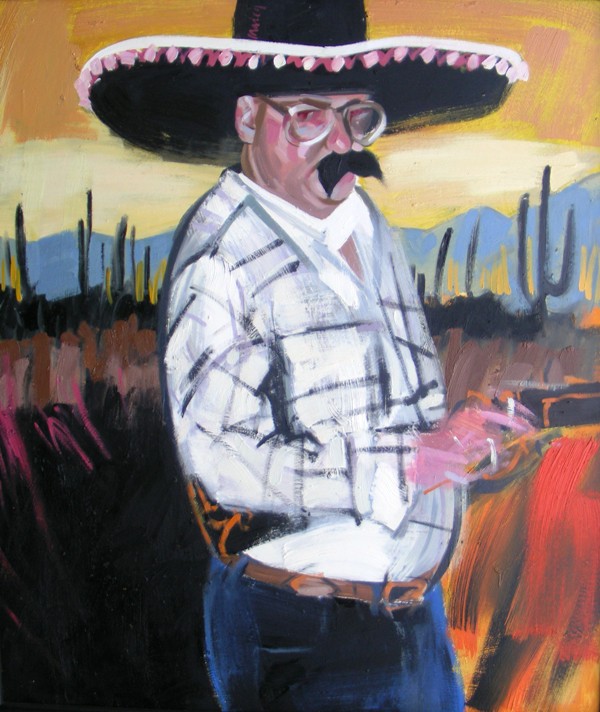 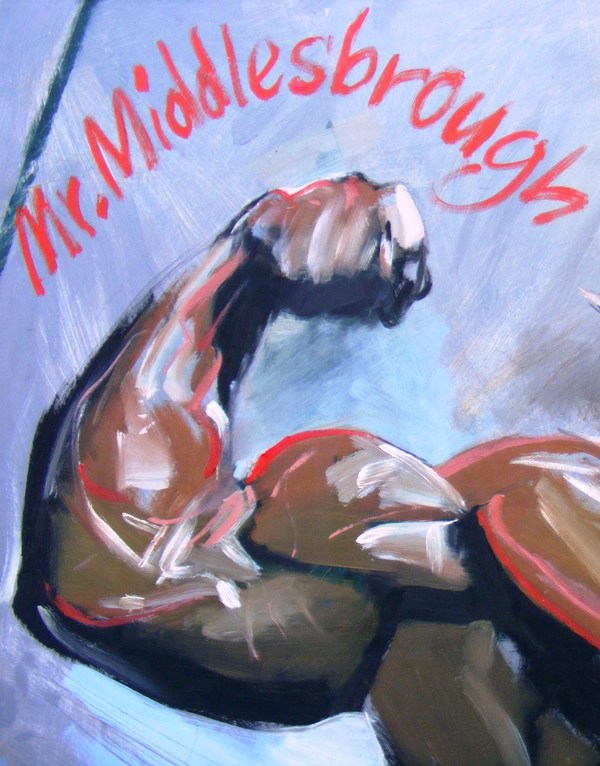 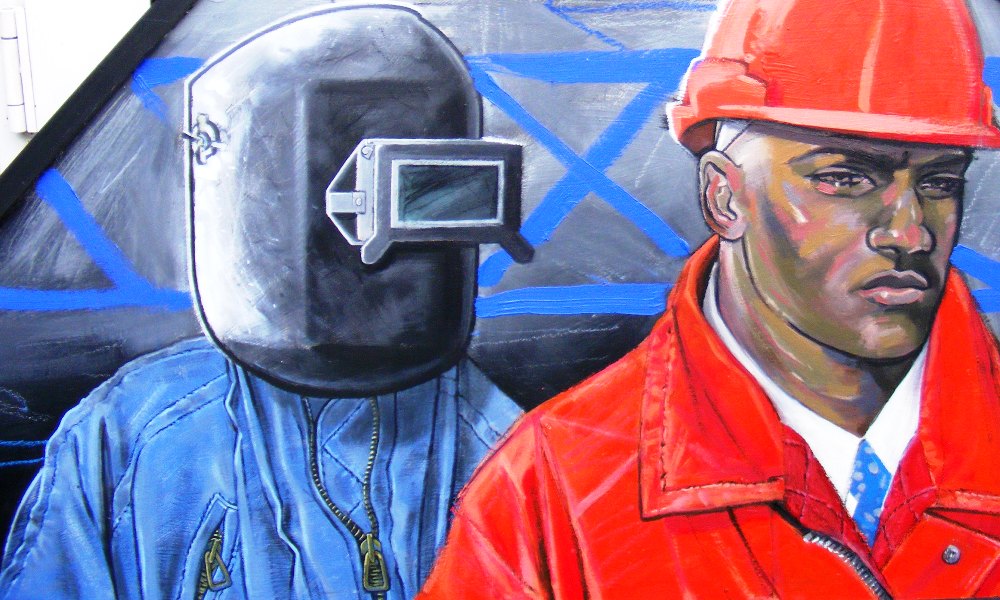 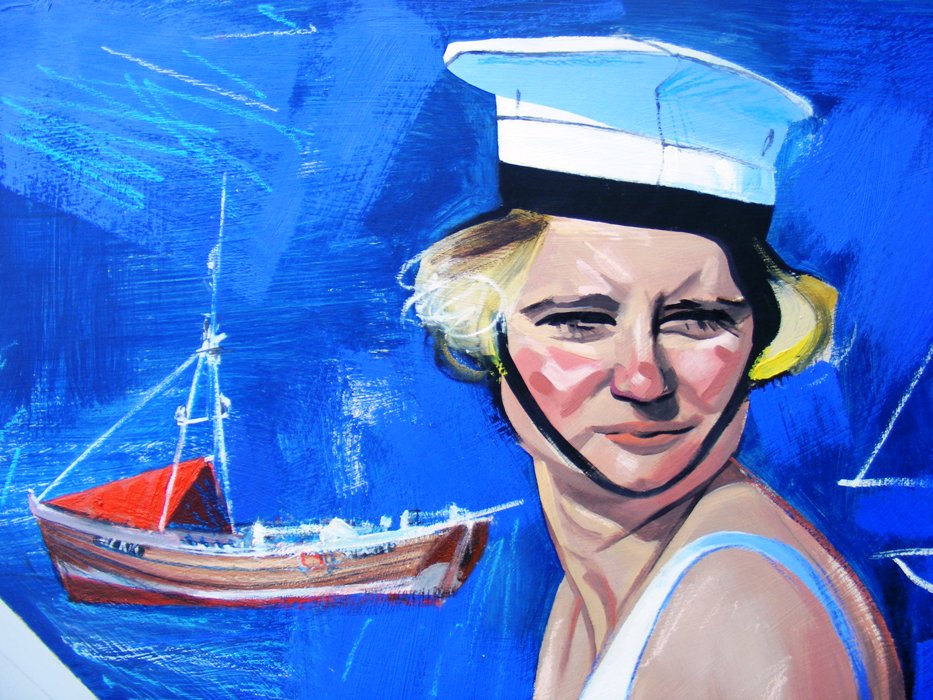 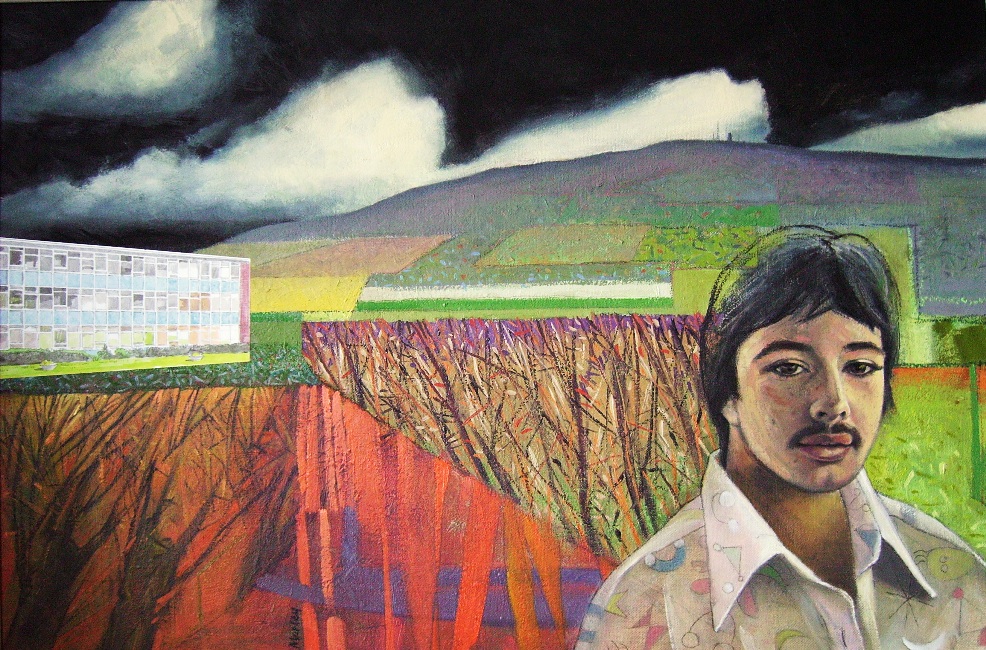 The paintings featured on this page should be judged as the products of an art college and post-art college period which played a part in the "painting swell towards the resurrection of human content in contemporary British art". In the art world, new work from "new innocents", if right for the times, sometimes is used with the strength of existing artists to alter directions within art. But, this is where I get a bit heavy - and to all you none art folk, the following won't make any sense. To all you art folk, this is still likely to make no sense. To those very few who "are in the know" - well done - this serves to sharpen your knowledge:

Painting (in western art) came to grief on the rocks of the 20th century - but I'm not going to tackle that topic in depth here on this site; that is a thesis for something separate inside other activities of my work as an artist. In an attempt though, to explain the above paragraph, it would be useful for me to say every generation of artist who painted in the 20th century, who had serious knowledge of art, had to deal with his/her own doomsday scenario: What should be done after Malevich? And, if they could get passed him, then what to do after Dada, or the anti "picturing the world" hardliners within Constructivism, or then perhaps after Rauschenberg, or then after the conclusions and directives of Greenberg and opinionated artists in the 1960s like Burgin, leading to art writers themselves leap-frogging painting and art as a whole and taking centre stage! The inevitable "painting come back" was going to occur and this is where my generation of practitioner was to emerge. But, just to jump ahead for a moment to where we are now, most people who follow art sort of know the century closed and the new one opened with the era of corporate wealth and media hype flowing away from true contemporary art and into the corrupting world of capitalism... Therfore, interestingly the fight goes on anew.

Allow me to focus slightly stronger now on the particular item in this page (human art representation)... At the end of the 1970s and into the start of the 1980s the painting backlash against the hold Conceptual and Minimal art was still having over the minds of the writers, galleries and exhibition organizers, finally broke through and made an impact for historians (the writers) to complete their review of art towards the end of the century. Painters had of course not stopped painting. Major exhibitions of leading painters were still occurring in the important galleries. However, the 1970s witnessed vital issues coming to the fore of the relationship of "the human in art" and the making process of art: Pictorial illusionism, story telling, allegory, symbolism, social comment, mythology, metaphor, expression,  "paint worship" (paint presence), emotion, sympathy, religion, anti-religion, etc - all the things that make painting and art what it is. Art critic Clement Greenberg's 1960s theories of painting's "purity" and its "unique art strength and domain" had been up-ended. Importantly, the back-lash was not a rejection of the theory of Modernism, it was a response to the theory that Modernism could "stop painting"; that Modernism could draw a line under painting and bring it to a close. After all, painting had re-invented itself time and again as it coursed through the 20th century in a bewildering variety of revelatory ways. Artists who painted, simply continued to paint, they always have done and always will do in fresh, new and individualistic ways despite the trends, fashions and art politics.

"Art and painting is contained in the minds of those who don't see past an historical moment".

A self-portrait done in an old fashioned graphic/illustration style combining a variety of linear, "blocking-in" and tonal methods and applications (note the use of Letraset half-tone on neck and T-shirt). A part of this image was used, along with selected children's and adult's artwork, for reproduction on town centre display boards after mima's first ever local open competition in 2006.

The logo on the T-shirt is a nod-and-a-wink to the role I played in the evolution of the cult-based Blaisers Bat Man poster promotion for organizers Mark Law and Andy Pears. Blaisers was THE indi club in M'bro back in the day. That, and the Rock Garden were the antidote dens to the mainstream night spots in town. I was employed as their graphic designer/poster artist directly after the great Fordy had worked for them (another local artist) . Although not actual drawings for nightclub posters, these self-portraits (see below) were often done in marker pen and combined Letraset or other devices similar to the business work I did in the 1980s. 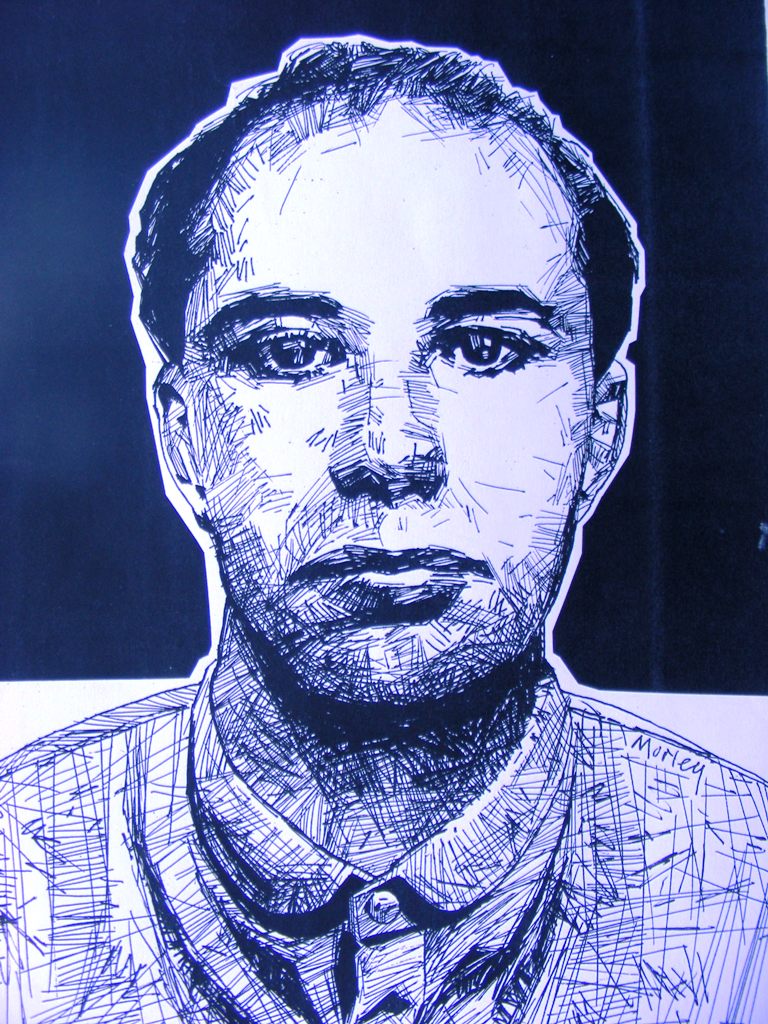 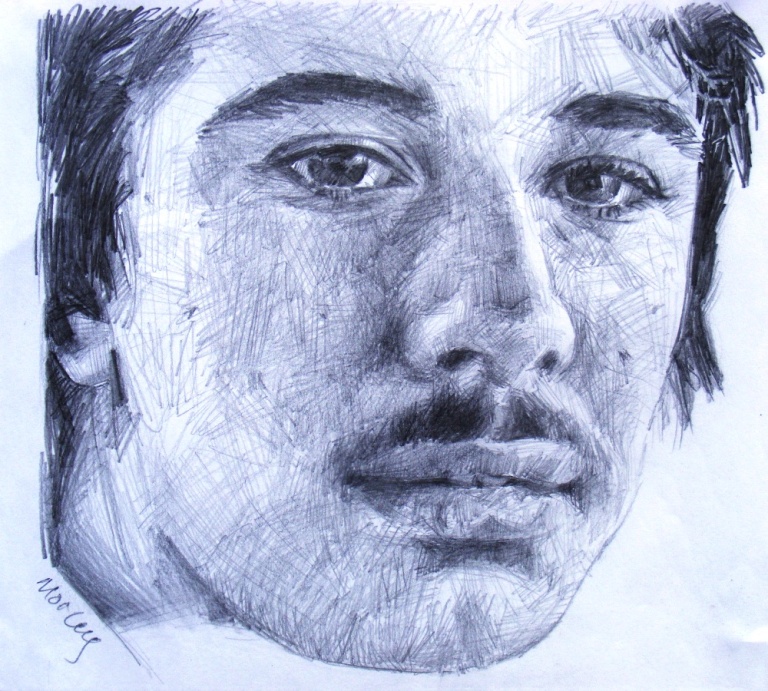 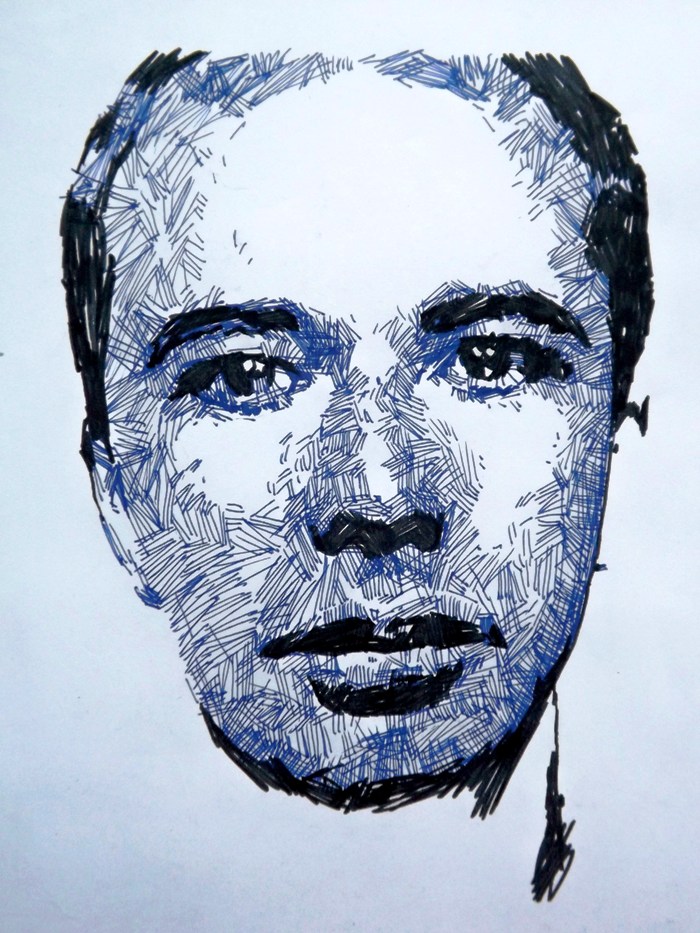 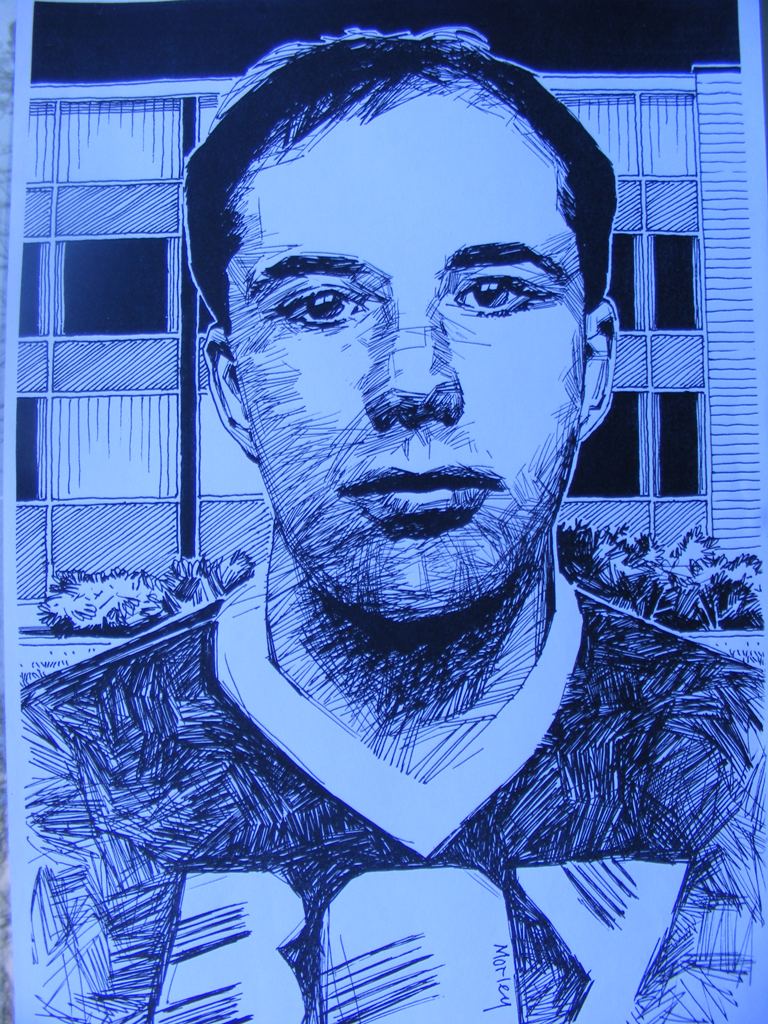 A self-portait alluding to me being a product of the "factory" which is we call state school. It's suppose to be 1982 - five years after leaving school. I played football with mates on Middlesbrough school fields each time I returned home to the gritty north from the sunny south during my art college studies. In the background are the windows of Green Lane Primary School, although they could be any school windows in any part of town. Some of the pen drawings you see above can be classed as "retro" peices producing the look of the illustrative quality of my 1980s/90s night club poster work again.

The piece of work which instigated the making of my logo. Not an image everyone likes, I must say. These sketched images of me in a curious and bleak urban landscape with a housing block were preparatory pieces to the oil painting (to be included on this page eventually) of the same title.

Examples of defunct letterheads which don't relate directly to this site, but help with the context behind the overall story and process towards a web presence. 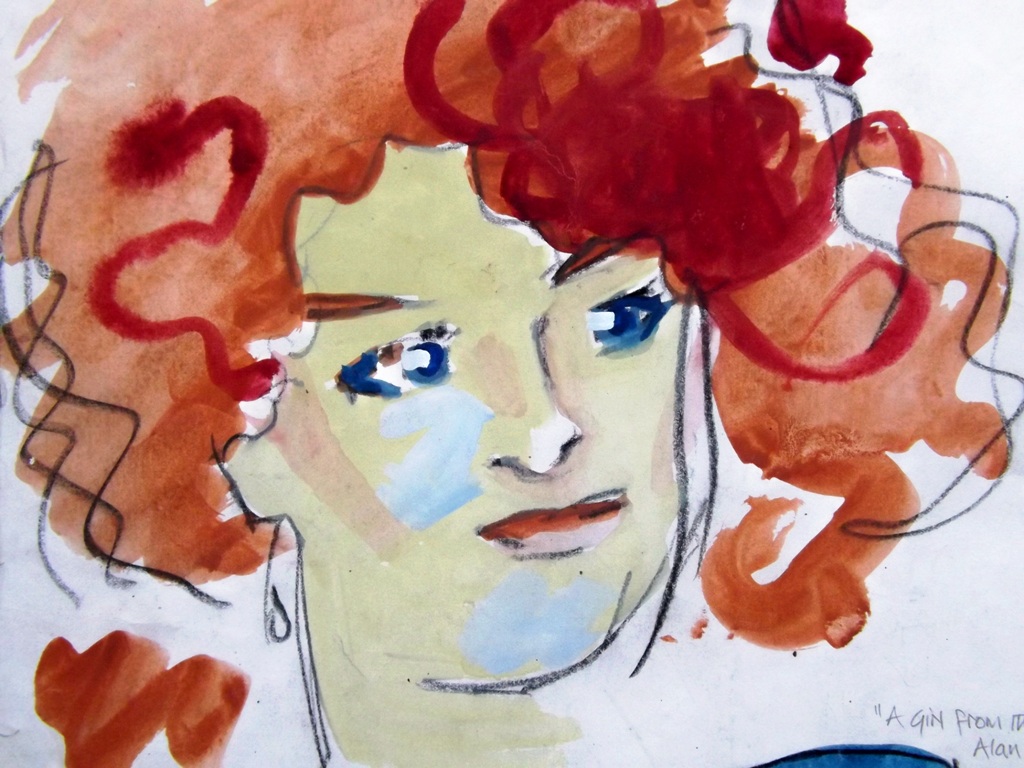 A Girl From The Ruby Street Parties. 1980. Watercolour and Conte crayon on paper. 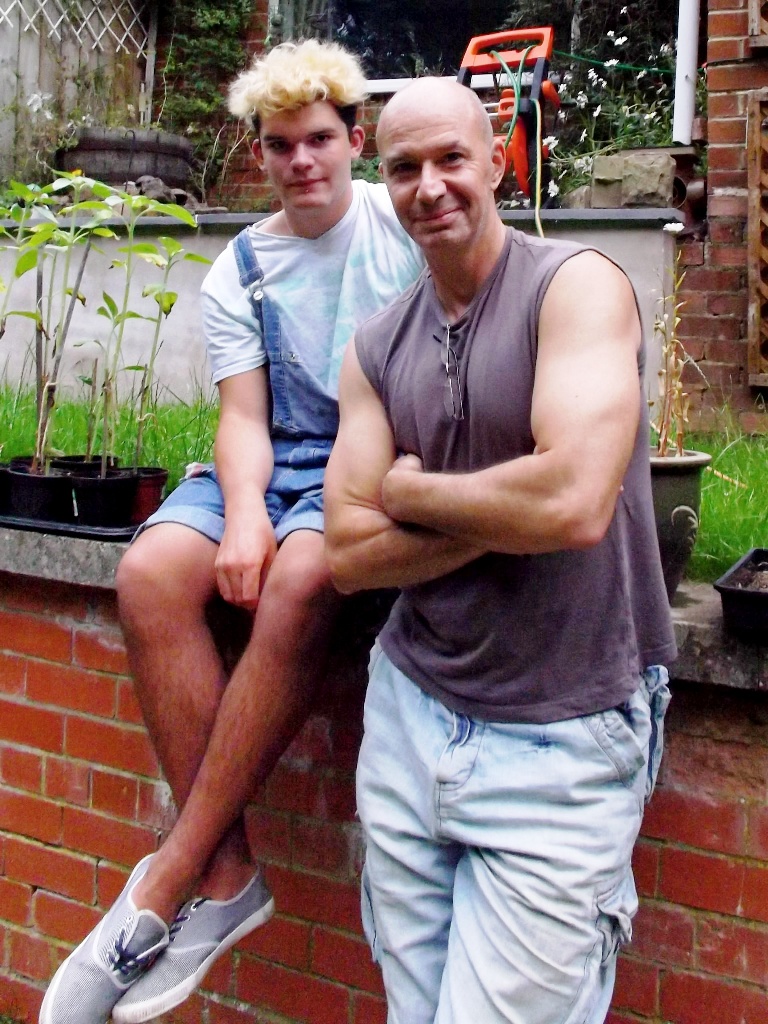